The Kanawha Valley has been fortunate to have some form of public transportation available since the late 1800’s.  The method of motivation has varied and the pick-up points and destinations have fluctuated, but people moving people for a paid fare have been a vital part of the area’s economy for many years. 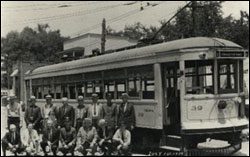 The business of providing public transportation has become a major enterprise in the Kanawha Valley.  Our public transit syswhich provides the area with some very essential services.

People Moving People—that’s the tradition on which public transit in the Kanawha Valley is based and the driving force behind the development of the Kanawha Valley Regional Transportation Authority, the largest people mover in the valley today.

KRT – as the system is known locally – began operating in late 1971, after the private bus company, Charleston Transit Company, called it quits.  Formed as a public authority, KRT was given a mandate by the leaders of the State, County and the City of Charleston to serve the people.  It was directed to provide efficient, cost effective public transit at a fair price.

The system today continues to follow that mandate to the letter.  With the addition of federal funds, the system has been able to expand and improve its rolling fleet of 67 revenue vehicles.

After 40 years of refinement, the KRT transit system is one of the best small public transit systems in the country and one of which the Kanawha Valley can be proud.  The fleet traverses nearly every major thoroughfare in the area, providing low cost, convenient transportation.

In 1971, public transportation in the Kanawha Valley was in jeopardy due to a 54-day strike which was called by Charleston Transit Employees.

The start of the authority was solidified by the work of hundreds of volunteers and devoted citizens who just would not let public transit die in the Kanawha Valley.  Through the efforts of these volunteers, a critical bond issue has been passed every three years since 1973.  This bond levy imposes a minimal tax on property owners at a rate which has not changed since 1979.  These funds (amount to approximately $8 million annually) are allocated by the Kanawha County Commission on a 50-50 basis to the citizen run authorities for the ambulance and transit services.

The board members of these authorities spend countless hours of their private time overseeing the professionals who run each of the services.  Thanks to all of these individuals, the Kanawha Valley has a public transit system worthy of everyone’s pride.

KRT has changed nearly every phase of its day-to-day operations in order to make the system desirable and responsive to the present and potential rider.

Since 1987 KRT has purchased some of the most recent technologically advanced buses available.  Computer controlled engines and transmissions have increased performance and fuel economy by over 30 percent.  In addition to the improved fuel economy, the vehicles cost less to maintain because of the ability to electronically analyze engine and transmission malfunctions.

Over the past forty years, the KRT bus fleet has been updated to meet its passenger needs and provide more efficient service.  The days of the old hot uncomfortable bus have long since passed.  KRT’s current bus fleet averages 7.7 years.

KRT serves the community through many other functions.  The American Public Transit Association (APTA) has a formula which shows that for every dollar spent on transit, three dollars in business revenue are generated.  Based on this formula, KRT’s financial impact on the community over the last thirty years is over $250 million dollars.  Additionally, one of the essentials for many new businesses often is dependability of public transportation.  KRT attracts new business by providing transportation to business districts and manufacturing facilities.

KRT helps provide the community with emergency preparedness by making available buses and operators for evacuation purposes by transporting supplies and volunteers to distressed areas.  Also, the KRT Evacuation Team, a group of volunteers trained to evacuate citizens to a safe location in the event of an emergency.  Their response procedure has been tried, tested, and has proven invaluable in a crisis.

In addition, the Kanawha Alternative Transit (KAT) provides service to individuals who have special transportation needs and require assistance.  The curb-to-curb van service is available to disabled riders who are not able to drive and do not have access to other transportation.

The Authority also provides gasoline distribution to other county agencies, including emergency vehicles and the ambulance service, saving local taxpayers approximately $100,000 per year.

The tradition on which public transit in the Kanawha Valley is based would be nonexistent without the dedicated employees of KRT, particularly the bus operators.

In town, bus stops are generally marked; however, on stretches between communities, things are less clear cut.  After driving a while, the operators learn the different signals people use.  As one operator put it, “You brush up on your mind reading course.”  Many of these operators have formed friendships that go back several years.  Some speak of watching passengers grow up on the various routes and of giving them advice as the years pass.  Often it has been said “All the therapy some people need is someone to listen.  Sometimes it’s the bus driver.”

But there is more to the job than just being friendly as the passengers board the buses for their destinations.  KRT’s destination is always SERVICE!

Part of that service usually unseen by the general public is the KRT Maintenance Department whose skilled Mechanics and Maintenance Service Personnel keep the buses moving across the Kanawha Valley.  The office staff is also a vital part of the daily operations at KRT.

The KRT systems management and the authority’s board of directors are constantly looking at ways to plan for the future, while realistically accessing the ability of the system to finance changes for continued and expanded operations.
The future is filled with possibilities and hope for new cost efficient ways to serve the community.  Many are simply dreams; however, KRT is constantly striving to find new ways to serve passengers, and offer clean, safe and efficient service in every case.